Ball pythons are one of the most popular pet snakes. But if you already own a small pet like a chihuahua, you might be concerned about its safety before bringing a ball python home. So, if you are asking yourself. “Can a ball python kill a chihuahua?” then this article is exactly what you need.

The chance of a ball python being able to kill a chihuahua is close to none. They grow up to 6 feet long. But they aren’t strong and quick enough to strangle an adult chihuahua. Your chihuahua might have a higher chance to harm a ball python.

Housing a chihuahua and a ball python together can be very dangerous for both. Read the full article to learn more on how dangerous ball pythons can be to your chihuahua and what you should eliminate any chance of harm to either.

Can A Ball Python Kill a Chihuahua?

Ball pythons use ambush techniques to catch their prey. They’ll wait for an opportunity then jump out and grab the prey with their teeth. They wrap around the prey and strangle them to death.

In theory, a ball python can kill a young chihuahua. An adult ball python is generally 4-6 feet long. Chihuahua grows 6-10 inches tall. A ball python is long enough to get around a chihuahua’s neck and constrict it.

But that’s all in all just a theory. In reality, a ball python would never even try to kill a chihuahua.

They are more likely to be afraid of the dog. A chihuahua gets around 4-6 pounds in weight. Which is way bigger than what a ball python considers as prey. Even if a ball python attacks a chihuahua, the dog won’t just wait there to die. It will kick, bite, and free itself from the snake’s hold.

The most a ball python would do against a chihuahua is a defensive strike. This kind of attack cannot kill a chihuahua. But it’s definitely enough to cause an injury. Most of the time, ball pythons are docile snakes. They curl up into a ball and hide their heads if they feel threatened.

The main point is if you have a ball python and a chihuahua, don’t house them together in the same cage. Limit contacts between them as much as possible.

Can A Ball Python Eat a Chihuahua?

Ball pythons are carnivorous snakes. They feed almost exclusively on rodents. The rule of thumb is that they eat whatever is the size of the largest part of their body. The biggest animals ball pythons can eat are big rats that weigh under 1 pound.

A chihuahua grows up to 6 pounds in weight. So, a ball python can’t eat an adult chihuahua. Usually, when a ball python and a domestic dog are left out of their cages, they just ignore each other.

The story is a little different for baby chihuahuas. A newborn chihuahua can weigh as low as 2.5 ounces. It’s small enough for a ball python to swallow.

A baby chihuahua must be kept out of reach of a ball python. I would recommend keeping them completely separate until the chihuahua is at least 8-10 weeks old.

Ball pythons need to be fed once every one or two weeks. If your ball python is already full, it will just ignore any other possible prey.

How to Keep Your Chihuahua Safe from A Ball Python?

A small pet like a chihuahua can be kept in the same house as a ball python. To do so, you should follow some safety measures. Taking full precaution will save your pets from any potential injury or death.

Ball pythons are good pets for their docile nature. But it’s still a carnivore. So, if your other pets are too small, you should follow safety rules. You should also keep your bigger pets away for the safety of the ball python.

Ball pythons are one of the most docile snake species. They are also very easy to handle. That’s why they are good as house pets. If you care for your pets properly, you can easily own a ball python with other pets.

Ball pythons are not considered a threat to pets. In fact, the opposite is true. It is common for a pet dog or cat to injure the snake.

So, don’t be irresponsible and endanger the lives of your pets. Take precautions and follow safety measures. A fight between a snake and other pets can break out at any time. Don’t give them that opportunity. Keep a close eye on your pets if they’re out together. 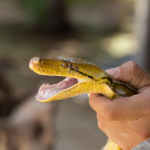 Do Ball Pythons Have Teeth? (Researched) 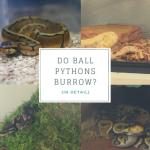 Can Ball Pythons See through Glass?

Hi, I am Atik! Ball Python Guide is a passion project aimed to help Ball Python owners both new and experienced to take better care of their slithery friends. Feel free to browse through our guides and reviews to learn about what’s best for your ball python.