Ball pythons seem pretty mellow as pets go. That’s probably one of the many reasons they are so adored in the reptile community. Now, their chill behavior may make you think that you can house more than one is a single tank. But that might not be the best idea. So, can ball pythons live together?

You should never cohabit multiple ball pythons inside a single tank. Ball pythons just like almost all other reptiles are solitary creatures and do not like to socialize. So, cohabiting them will cause physical and mental issues that can be deadly for them.

To understand why ball pythons are better kept in solitary tanks please read till the end for a proper understanding. Also, as a bonus I’ve discussed a bit about cohabiting ball pythons for breeding. So, if you are into that stuff this article should provide you some basic knowledge.

The Lonesome Life of Ball Pythons

To expand on whether ball pythons can live together, let us first try and understand the preferred habitat of ball pythons. Ball Pythons are found in many different habitats throughout Africa in particular. Senegal, Mali, Ghana, Benin, Tango, etc. are some of the countries where ball pythons are found in plenty. They mostly live in Savannahs, grasslands, and woodlands.

Plantations and bushy lands are also common habitats for ball pythons. They are nocturnal and do most of their activities during dawn and dusk.  The wet season is when they are most active. Ball Pythons like most reptiles are solitary. In the while they generally keep to themselves and have low tolerance towards any other ball pythons. They only get together for reproduction once every year. That’s the only time they non-violently come in contact with others.

Issues with Cohabitation of Ball Pythons

Reiterating that ball pythons aren’t social and they do not like company. This is the main reason why you should not keep 2 or more ball pythons together. They would just not be happy. So, companionship should never be forced on them. Ball pythons in the same tank may compete over food and shelter as well, making the idea even worse.

Here are some issues with cohabitating ball pythons –

Ball pythons in the same habitat can compete for the same resources. They can compete over their preferred basking spot.

As a result, the weaker of the ball pythons you keep in the same tank may suffer from malnutrition and other health problems.

Compared to other snakes, ball pythons are less likely to be cannibalistic. But it’s not completely impossible.

It has to be mentioned once again that ball pythons do not like living together in the same tank. They find it stressful.

Often it leads to them losing appetite because of the stress. Long-term stress can lead to other awful problems as well. For pregnant ball pythons it can cause egg binding which can be deadly for female ball pythons.

Male ball pythons can often fight with each other in the same tank. This can lead to one or more of the ball pythons getting hurt. The worst-case scenario some of your pythons may die because of the violent interactions. So, this is something you would not want to do.

2 female ball pythons in the same tank can lead to undesired fighting to compete over different resources. While the combat might not be as serious as that between 2 male ball pythons, all the other problems mentioned above still remain.

Keeping a male and a female ball python in the same tank can mean uncontrolled breeding. This is especially problematic for people who keep pythons for fun and do not want to breed them. The female can also become over-bred in such a situation and eventually die.

Housing Male and Female Ball Pythons Together for Breeding

November-March is usually the breeding season for Ball Pythons being caged in tanks. A male and a female ball python should only be kept together during this time frame.  It is different in the wilds though. When breeding in tanks, the temperature of the enclosure needs to be cooler than how it normally is. This is especially the case during night time.

Even during the breeding season, ball pythons won’t suddenly get along with each other. A little bit of fighting may exist but that is not all that concerning. During this time, nature will take over and the male will show sexual desire. Fighting will eventually settle down and they will become more intimate with each other.

They will lock with each other in a sex position and the female’s tail is above the male’s. The ball pythons will be connected in this lock position for at least 4 hours. It can last up to 2 days. During this time, the ball pythons cannot be frightened or disturbed. This can lead to unsuccessful breeding.

When the ball pythons are separated, the male python should be brought out of the closure. The same male python can be used to breed many other female ones.

After a successful period in the lock position, the female will show a different behavior. It will prefer the cool side of the enclosure. The female might frequently wrap itself or lie down with belly facing the top. These are signs of pregnancy. The female will shed her skin within 2-3 weeks of ovulation and lays eggs around 30 days after shedding.

So, can ball pythons live together?’ The answer is a strong, no. If you want to keep multiple ball pythons in your place, please keep each of them in different tanks. Let’s make sure we value each life and take the best possible care of them.

I hope this article was informative enough to teach you about the consequences of cohabiting ball pythons together. But if you want to do it for breeding then knowing when to do it and how, will ensure the health of your slithery pets. 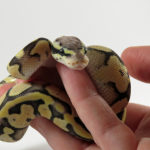 Why Is My Ball Python Wheezing? (When Breathing) 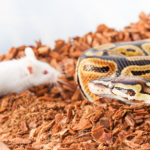 How Often Should You Feed Ball Pythons? (Ultimate Guide) 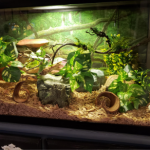 How to Increase Humidity in Ball Python Tank (Explained)

Hi, I am Atik! Ball Python Guide is a passion project aimed to help Ball Python owners both new and experienced to take better care of their slithery friends. Feel free to browse through our guides and reviews to learn about what’s best for your ball python.