Ball pythons are generally known to be semi-arboreal. They generally stick to the ground but often like to climb trees. What they don’t usually do is burrow. But some owners often do see their ball python burying themselves underneath the substrate and become confused about whether or not do ball pythons burrow.

YES, ball pythons often burrow. However, digging holes might not come naturally to many. But some of them might tend to burrow during the daytime. Especially the ones kept as domesticated pets.

If you ever come across a ball python or keep it as a pet, it should be taken normally if you see it burrowing underneath its bedding. As most of the time it’s not because they are sick or something like that but because they just simply like it.

Is It Normal for Ball Pythons to Burrow?

As previously mentioned, some ball pythons tend to burrow while others don’t. While it’s mostly common in domesticated ball pythons which are often kept as pets, you might also come across wild ball pythons exhibiting such tunneling behavior.

This proclivity might be a result of their change in climate or weather. It could also arise due to a personality change. However, there are a few notes you should keep in mind if you’re the proud owner of a ball python. If your beloved pet has started burrowing out of nowhere, there’s a chance that there’s something wrong and you should investigate.

If your ball python is not being monitored daily, the chances are that you will fail to decipher any signs of stress and anxiety which will come hand in hand with its newfound need of wanting to burrow itself.

But on the other hand, if your ball python has always loved burrowing and does so regularly, there is no need for you to be worried. Just let your ball python enjoy its time underneath the substrate.

Do Ball Pythons Burrow in The Wild?

Now, this is where it gets tricky. Certain species of ball pythons are adapted to certain activities such including burrowing. The most famous would be the Calabar burrowing python. It might not have a sharp front, but its blunt head allows it to dig through the earth. And the thick scales are a bonus.

But whenever we’re observing burrowing pythons, we should distinguish the fact that those which are adapted to burrowing have thick and resistant skin that will not get hurt if they have to push through and encounter rocks or any sharp-edged objects.

Looking at this from a more extensive perspective, it’s safe to say that ball pythons are normally not designed for burrowing as they are born with soft scales and plump and fleshy muzzles. With this exterior, it is not very probable that they will be able to penetrate the rough and hard ground beneath them.

Do Ball Pythons Burrow in Their Bedding?

This is where we draw the line between ball pythons in the wild and the ones being kept as household pets. It’s no surprise that both these surroundings offer different forms of environment no matter how much you try to provide a natural habitat for them. A ground will not be the same as a soft-bedding for your python to rest on. In this case, it will be visibly easier for your ball python to make a burrow.

Common beddings for pet ball pythons include coconut husks and aspen shavings which are very soft and not to mention lightweight, so can be easily penetrated. So, they can easily move the obstacles out of their way as they make their way underneath the substrate. Sometimes it’s just accidental due to the substrate just being so loose. Other times it’s just something your ball python likes to do.

Should I Take the Burrowing Normally?

Burrowing shouldn’t be considered a problem if your ball python has been doing it for a while now. For many of them it is just a personality trait. Sometimes it is just accidental due to the substrate being so loose which we’ve talked about earlier. So, if your pet ball python seems to enjoy digging burrows in its bedding, just let it be. Chances are that it’s just enjoying its time inside the burrow.

Research has shown that gender might come into play when we talk about burrowing. By that, I mean that one sex burrows more than the other. And this happens more with the female species.

The reason is quite simple. Female ball pythons tend to be more sedentary and terrestrial. So they spend a considerable amount of time on the ground in contrast to their male counterparts who spend their time climbing trees.

Even though it’s quite strenuous to figure out why some of the ball pythons burrow while others choose not to, this act should not be taken with foreign specs. It’s completely natural for some of them and more so if they’re being kept as pets. Just make sure you’re keeping your pet under check.

Strictly speaking, burrowing might be a big problem, but only if it’s taking place suddenly. Other than that, it is not a threat to your ball python’s life. And most of the burrowers have been doing that since the beginning so there’s nothing significant to worry about.

What you should look out for are sudden burrowers. Now, these are the ones you need to observe keenly. Mainly because there might be a few issues that are triggering them to suddenly start burrowing. Now let’s look at some of those problems:

Lack of moisture will automatically send your python underground looking for water so it’s best to keep the humidity in check as not to end up experiencing a disaster. It should also be understood that fluctuations in humidity might affect their lungs which will lead to long-term complications.

What Should I Do If My Ball Python Doesn’t Burrow?

If your ball python stops burrowing, there can only be a few important reasons behind it. But before I explain, you should know that there is absolutely nothing to worry about. Ball pythons are not designed to burrow in the first place. Some do so as a result of their environment or personality. Other than that, if your ball python has stopped burrowing, just let them be.

But be sure to analyze whether your ball python is going through other significant changes that will surely affect its health. Weight loss, aggression, incomplete shedding, loss of appetite are signs you should look out for.

But all in all, if your ball python seems to be more comfortable without burrowing and seems to be perfectly healthy then you have not a thing to worry about.

Even though their sudden shift to burrowing may come as a concern, under normal circumstances there is nothing to worry about. Just make sure that your pet ball python has specific hides to keep itself hidden. Whenever it wants as lack of hides might lead to excessive burrowing and anxiety.

Hope I was able to deliver an answer to your question ‘’Do ball pythons burrow?’’ Thank you for taking the time to read the entire article. Have a nice day! 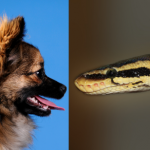 Can A Ball Python Kill a Chihuahua? (In Detail) 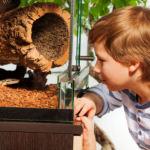 Can Ball Pythons See through Glass? 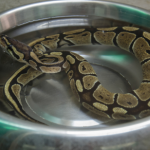